The re-creation of Seiko’s first Alpinist watch from 1959. An important sports watch classic is re-born. It was in 1959 that Seiko’s first Alpinist watch was introduced to meet the needs of mountain climbers and recreational field sports enthusiasts. From the start, it was well received and, over the ensuing decades, its reputation spread far beyond the Japanese market for which it was first intended. Remarkably, it was the first Seiko watch ever produced with sports in mind and it blazed a trail that led to the development of many landmark timepieces and timing devices for sports, from stopwatches to diver’s watches, in the decades that followed. While its core character has remained unchanged, its design has evolved over time. Today, the first Alpinist watch from 1959 is re-born in a re-creation that has the high functionality that characterizes the Prospex collection, whose very existence owes so much to the first 1959 Alpinist.

As striking today as it was 62 years ago.

The original 1959 Alpinist watch
Born in 1959 as the Seiko Laurel Alpinist, this watch was a new departure for Seiko and marked its entry into the sports watch arena. It had a screw-back case to prevent dust or sand particles from entering the case. It had a sturdy leather cuff band to protect the watch from perspiration. The indexes and the hour and minute hands all had luminous inserts ensuring high legibility in the dark, and the name Alpinist was evoked in the mountain-shaped markers at the three, six, nine, and twelve o’clock positions. These four clearly differentiated markers represented the four main points on a compass and, with the specially designed marker at twelve o’clock, allowed the time to be read safely and correctly at any angle. This was a feature that became central to the design of many subsequent Seiko sports watches and remains so still today. The re-creation brings the 1959 Alpinist back to life in every detail. The generously sized markers are, as before, set against a black gloss dial. White minute markers form an inner ring on the dial base, just as on the original. Of course, the indexes and the hour and minute hands are coated with Lumibrite for legibility in the dark. The glass is a box-shaped sapphire crystal that re-creates the gentle feel of the original watch’s characteristic domed glass. The watch is presented on a leather strap that has the same jagged stitch design as its predecessor.A slimmer profile and upgraded specificationsWhile the re-creation is faithful to the original design, it has been brought right up to date in technology and has the high specifications and functionality for which Prospex is renowned. It now incorporates a date window between four and five o’clock and is water resistant to 10 bar. The box-shaped sapphire crystal is treated with an anti-reflective coating on the inner surface, delivering high legibility. The watch is powered by the slimline Caliber 6L35 which has a power reserve of 45 hours. Despite the addition of a date and the enhanced performance, the case is just 1.0mm thicker.The re-creation will be available as a limited edition of 1,959 at the Seiko Boutiques and selected retail partners worldwide in August 2021.

Three modern re-interpretations of the Alpinist join the Prospex collection. In addition to the limited edition, three other new watches pay homage to the 1959 Alpinist. They are inspired by the original watch’s distinctive design but are modern in their execution and, of course, up to date in technology, form and function. Lumibrite is applied to all three hands and the indexes that rest on silver bases to create a multi-dimensional effect. The cases are polished to creating a modern look, especially when combined with the gently rounded contour of the dial and case.All three watches are powered by Caliber 6R35 which delivers a power reserve of 70 hours. The glass is a curved sapphire crystal that is resistant to scratches and the watches are all water resistant to 20 bar. Two watches are offered on stainless steel bracelets while the green dial version comes with a leather strap.All three watches take their place in the mainstream Prospex collection and will be available at the Seiko Boutiques and selected retail partners worldwide in August 2021. 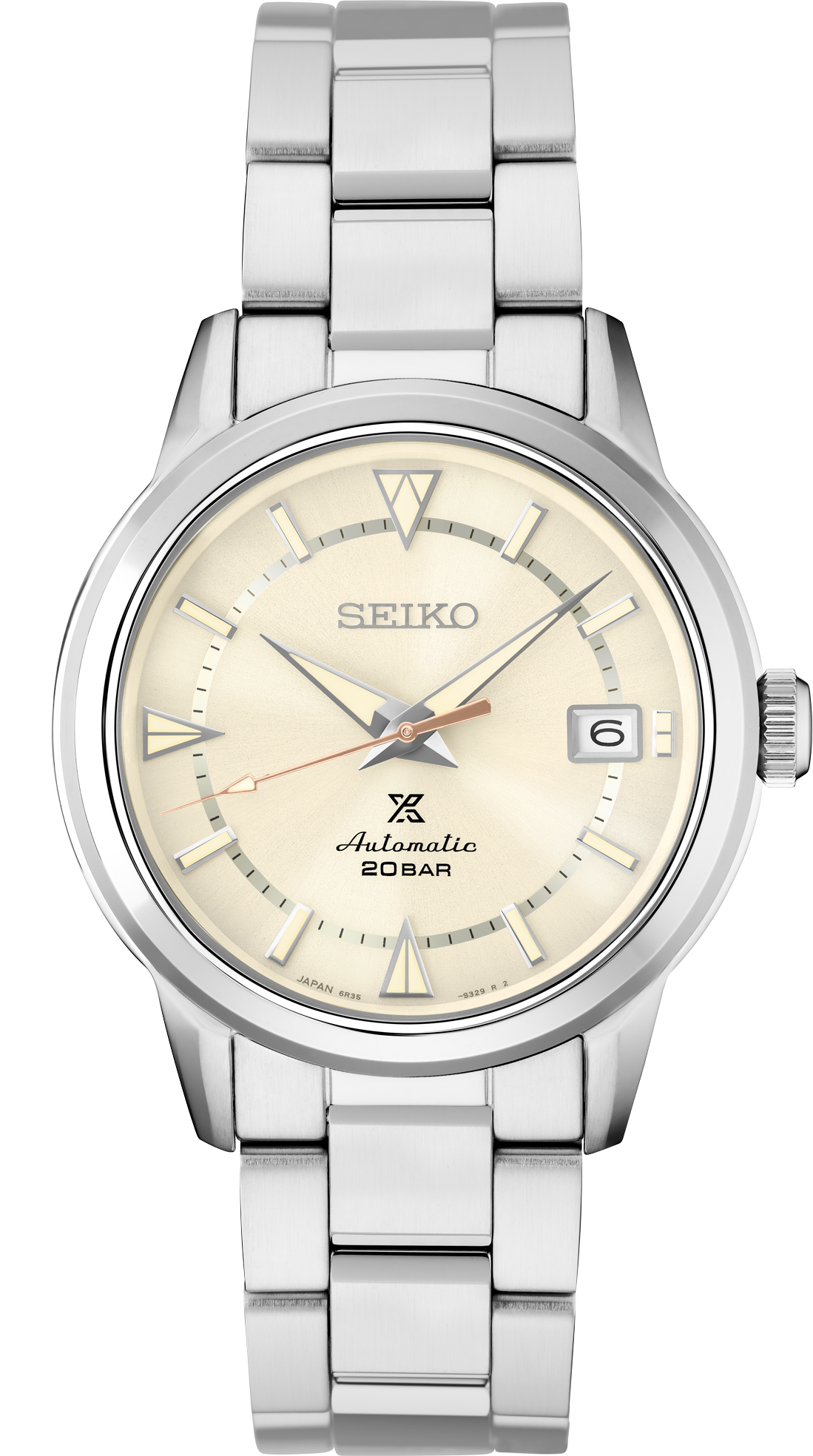 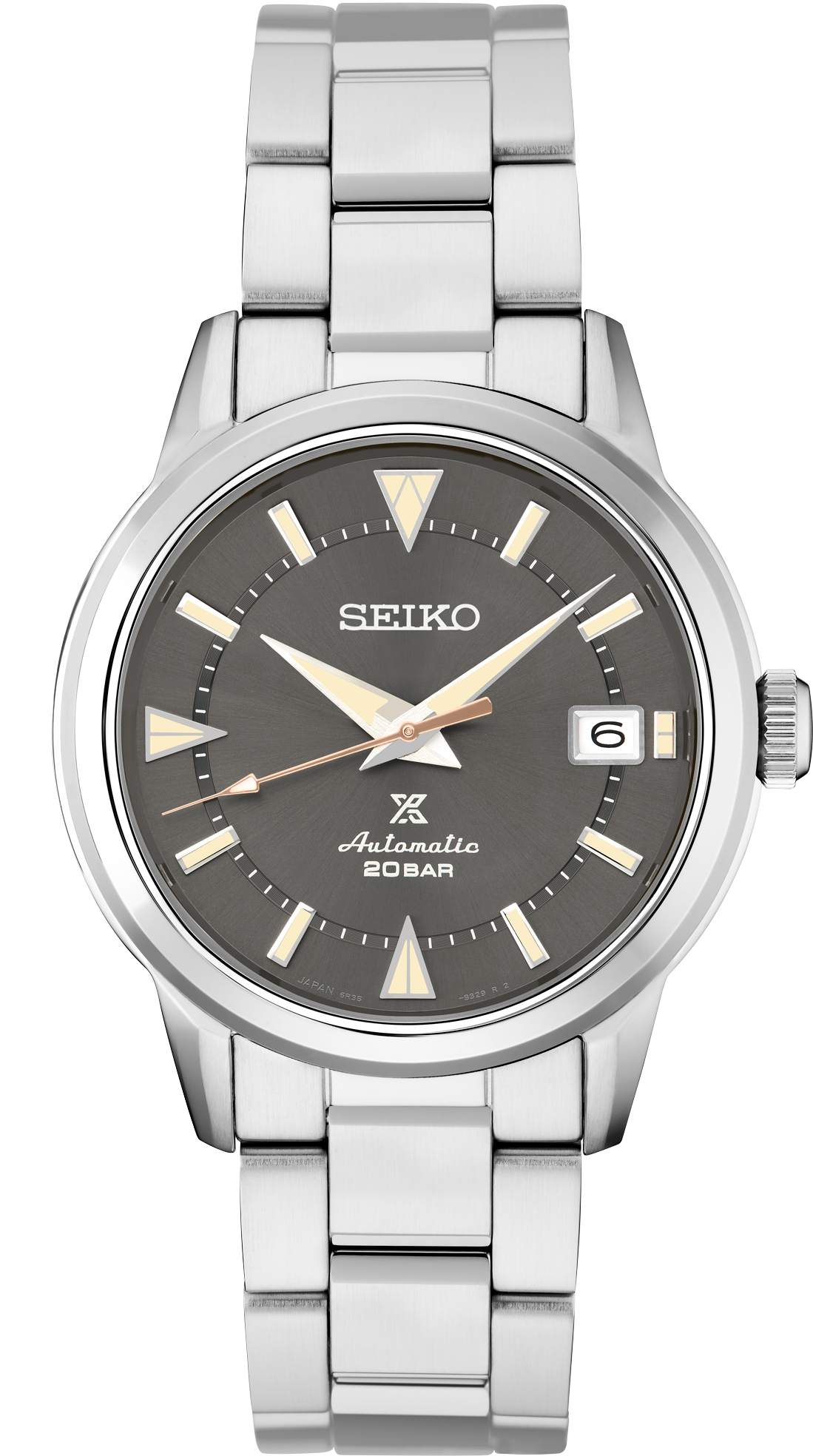 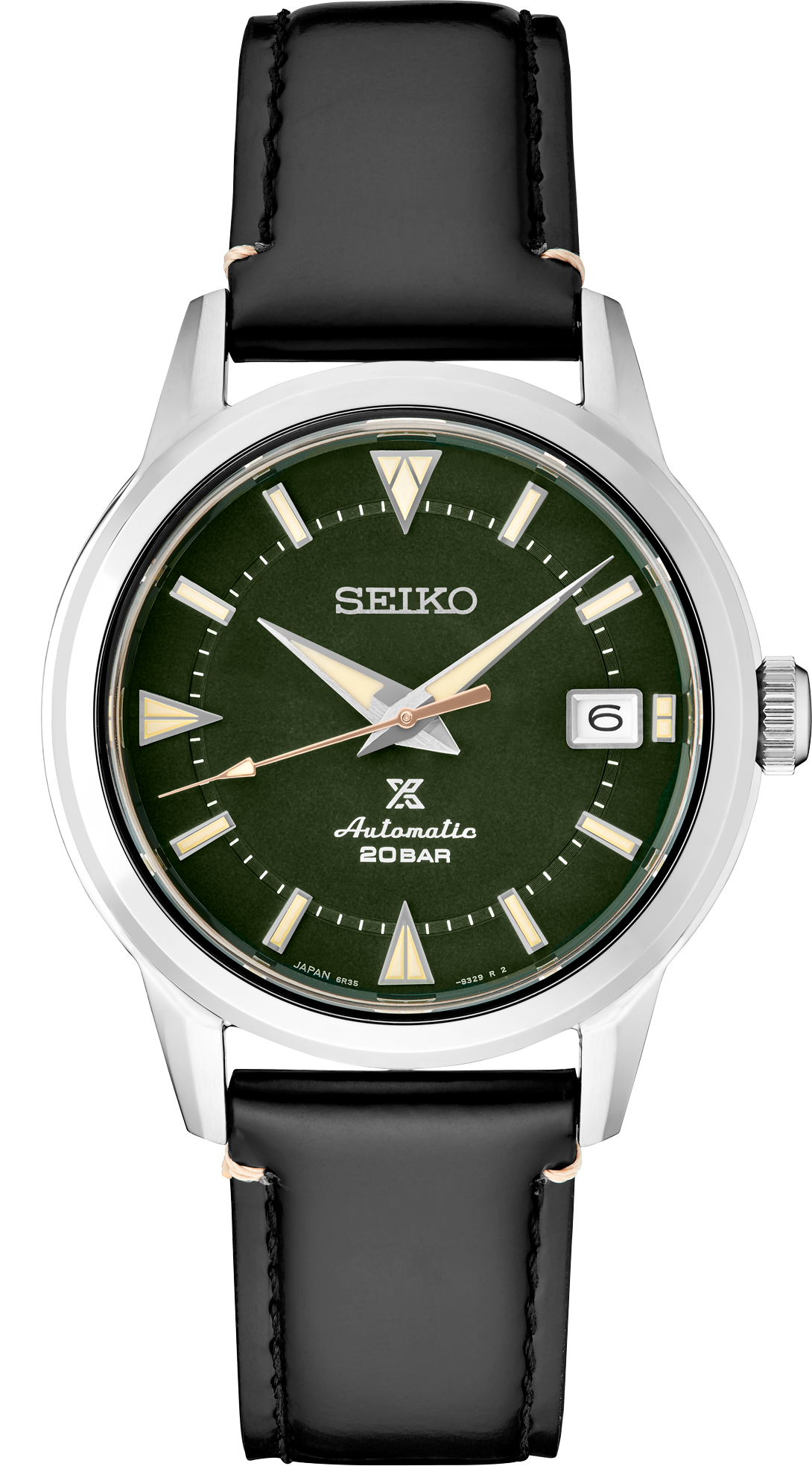