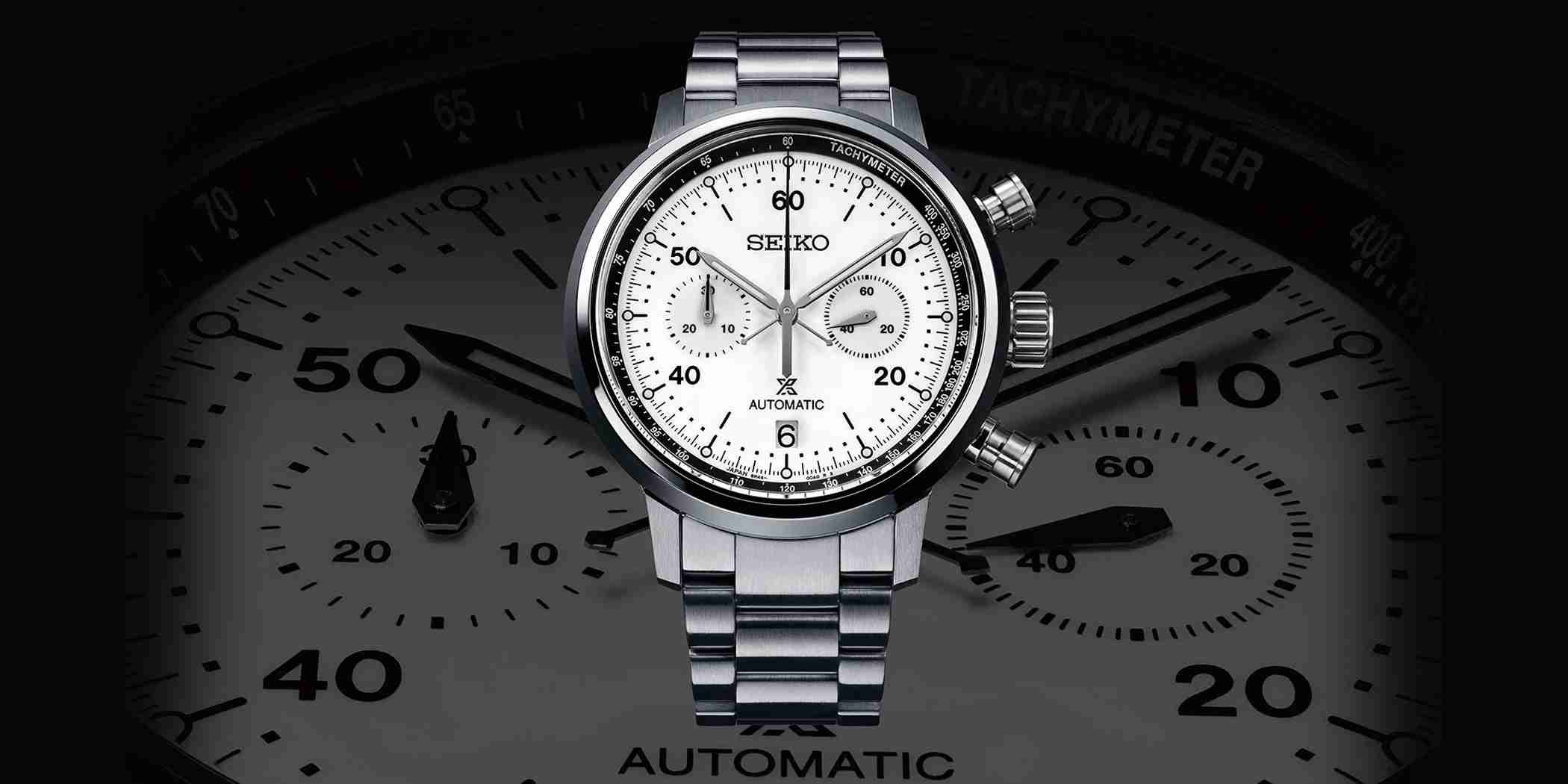 In the 1960’s, Seiko announced itself on the international sports timing stage with a whole new generation of high-precision equipment that was enthusiastically endorsed by many international sports federations and used to capture elapsed time at many of the world’s leading sports events. Central to this success was a range of stopwatches that incorporated Seiko’s innovative “heart-shaped cam” mechanism, a feature which delivered a level of precision once thought unachievable by manual sports timing devices. Then, in 1969, Seiko introduced the Seiko Prospex Speedtimer with the innovative Caliber 6139. It was the world’s first automatic chronograph with a column wheel and vertical clutch, two devices that delivered real improvements in the measurement of elapsed time in a wristwatch and are still a prerequisite in high functionality chronographs.

Today, a new series of five watches inspired by the Prospex Speedtimer and Seiko’s rich and continuing tradition of sports timing join the Prospex collection. A limited edition watch with a new automatic chronograph movement pays faithful tribute to the design of the 1964 stopwatch, while a second version with the same caliber and a series of three solar chronographs complete the range.

A LIMITED EDITION CHRONOGRAPH THAT SHOWCASES THE VERY BEST OF SEIKO’S CHRONOGRAPH EXPERTISE. 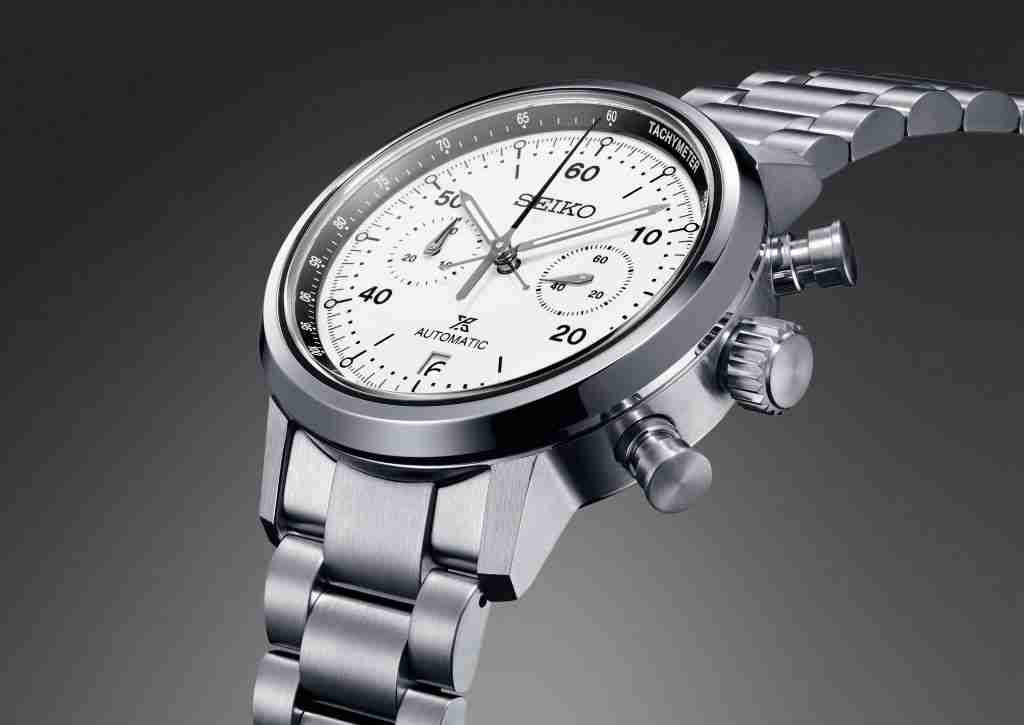 The limited edition chronograph’s dial pays homage to the 1/5th second stopwatch from 1964 and every detail of its design inherits the precision and legibility that were crucial to the high performance of the original. The numerals at each ten-second mark and the markings stand out prominently against the plain white dial and guarantee the same high level of legibility. The chronograph second hand is gently curved down towards the dial so that the tip of the hand is as close as possible to the dial’s markers and extends to the tachymeter markings at the very edge of the dial, thus ensuring that elapsed time can be read accurately at a glance. The large concave pushers ensure the high operability for which the original stopwatch was renowned. 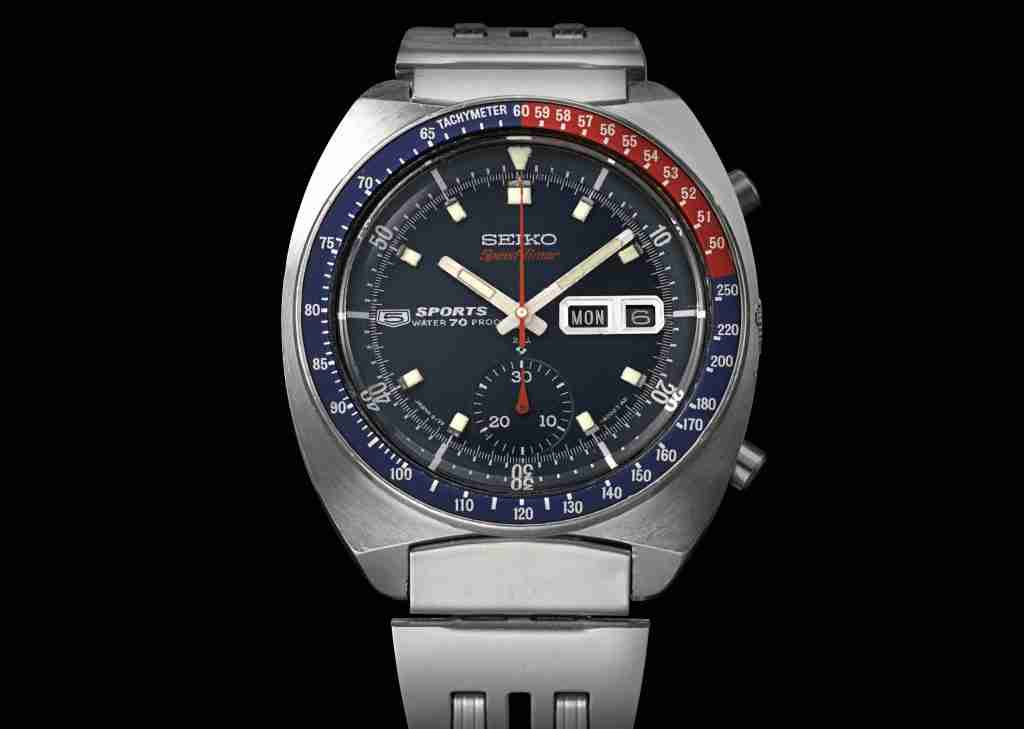 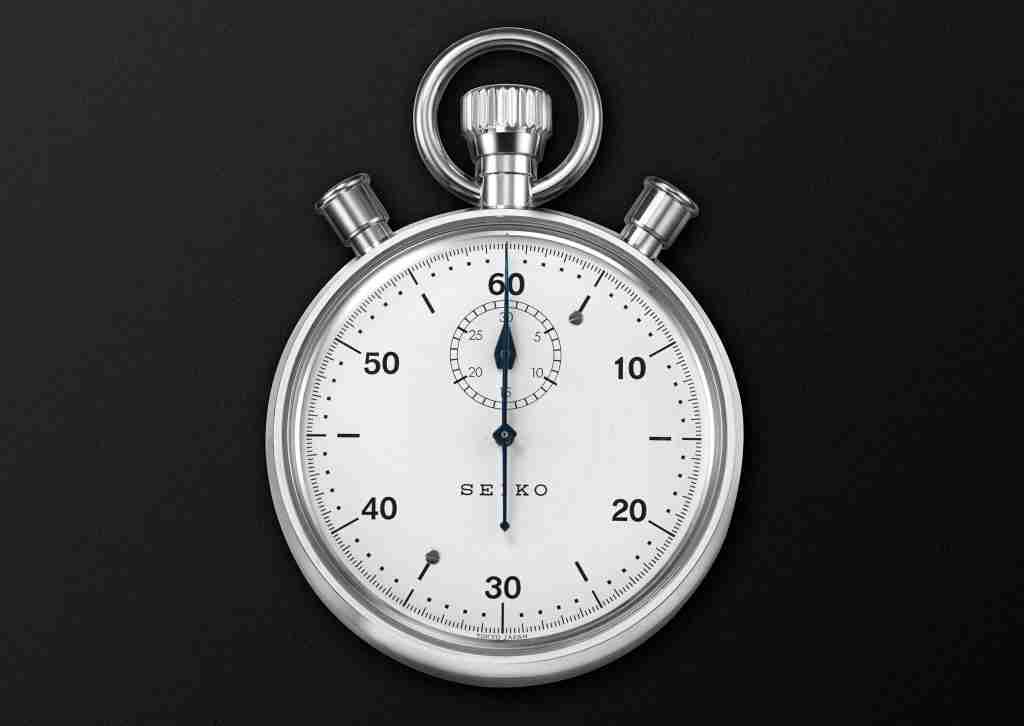 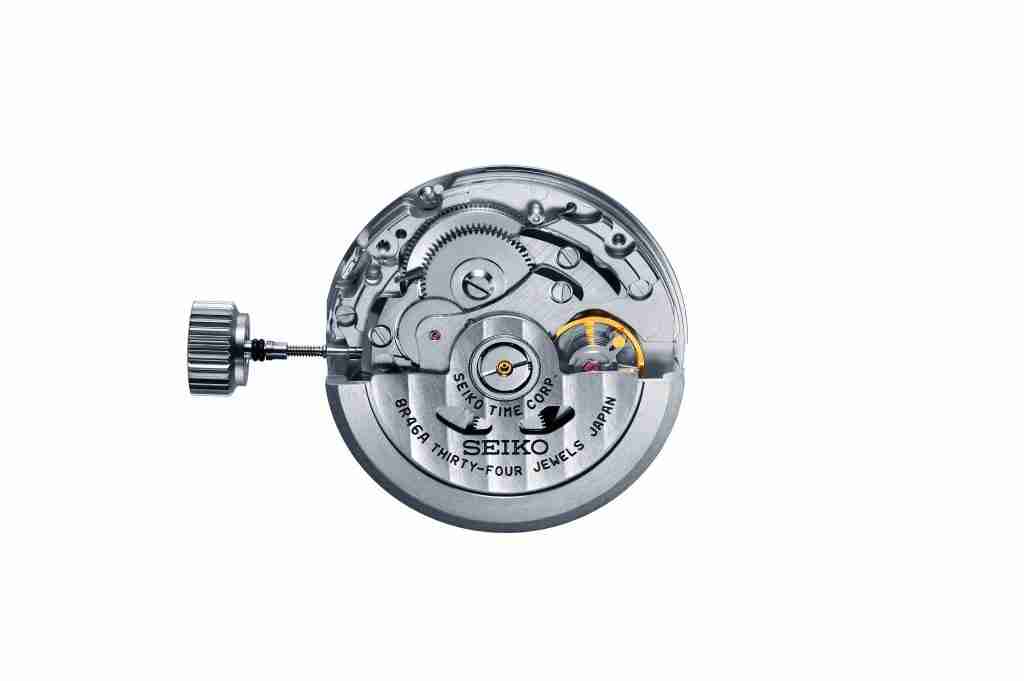 Thanks to the use of MEMS technology, Caliber 8R46 offers high precision and durability.

The watch incorporates a new movement from Seiko’s most advanced chronograph 8R series, Caliber 8R46. It shares the same performance attributes as Caliber 8R48 but incorporates two sub-dials instead of three and has a date window at the six o’clock position. The vertical clutch and column wheel ensure the precision and durability which are the hallmarks of the 8R Caliber series. The escapement is lightweight and strong, thanks to the use of MEMS technology which enhances the stability of the watch’s precision. With the push of the reset button, the hands return back to zero instantly and in perfect synchronization.

The watch is presented on a stainless steel bracelet that is specially designed and constructed for the series. Its thickness, weight and low center of gravity ensure stability and a high level of comfort on the wrist. If the wearer chooses, the bracelet can be replaced with the black leather strap that is also included and whose stitching is designed to increase the durability of the strap.

The new Prospex Speedtimer is offered as a limited edition of 1,000. 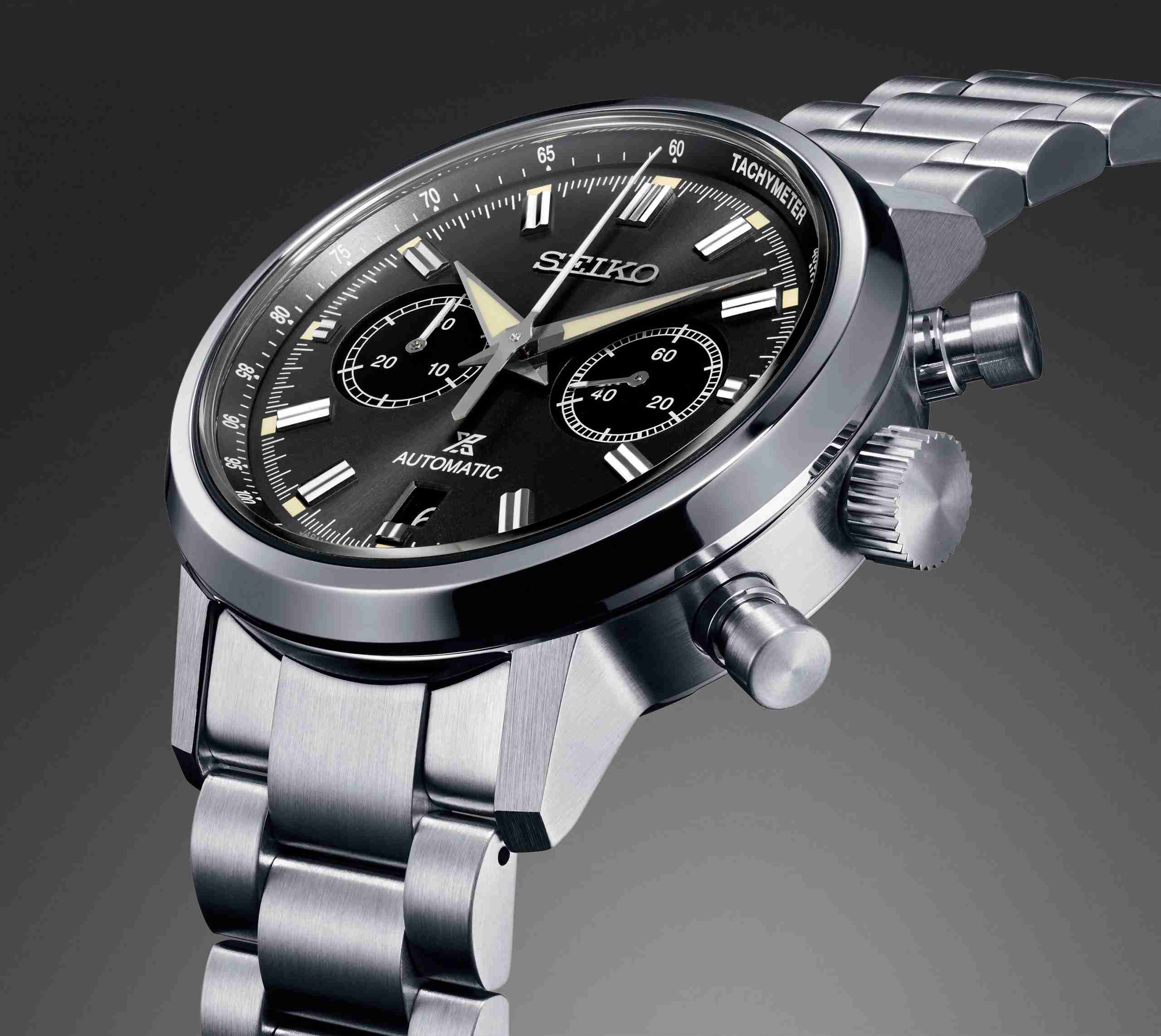 In addition to the limited edition watch, a new creation with the same case and bracelet and also powered by Caliber 8R64 joins the main Prospex collection. The dial design is a subtle nod to Seiko’s and Japan’s first chronograph wristwatch, the Crown Chronograph from 1964. Its beveled hour markers, sharp hour and minute hands with colored Lumibrite, its chronograph pushers and the markers on the outer dial ring echo the design of the original. 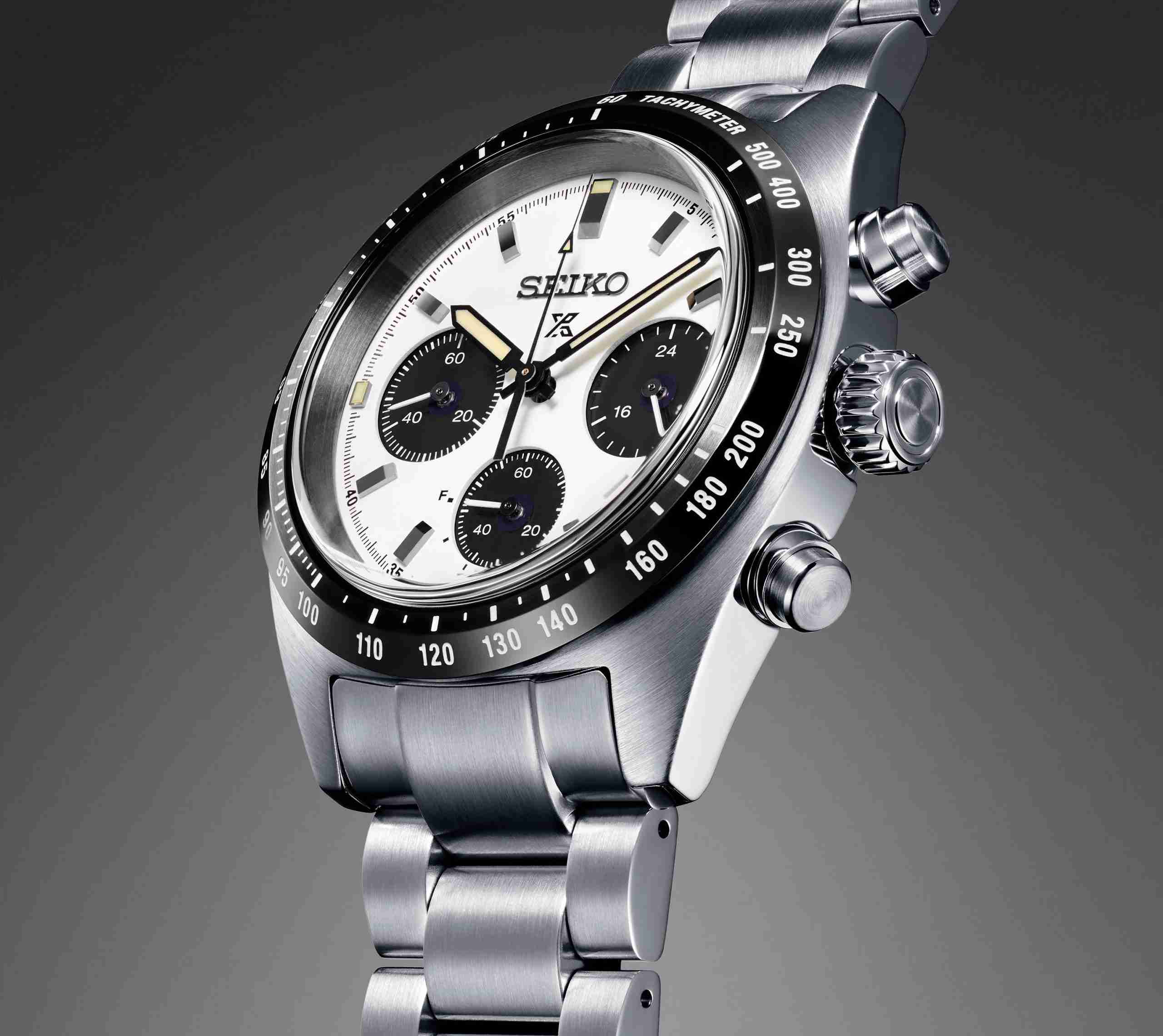 The new series also includes three new solar chronographs powered by Caliber V192. The case shape is faithful to the original but its 39mm diameter, the combination of hairline and smooth polishing on the bracelet and the curved sapphire glass bring it right up to date. These new solar chronographs are offered in three different dial colors; white, navy and black. Their dials have a sandblast finish which ensures the high level of legibility that is a core characteristic of every Prospex watch. All three watches will also join the main Prospex collection.

All five creations in the new Prospex Speedtimer series will be available from November 2021 at the Seiko boutiques and select retail partners worldwide. 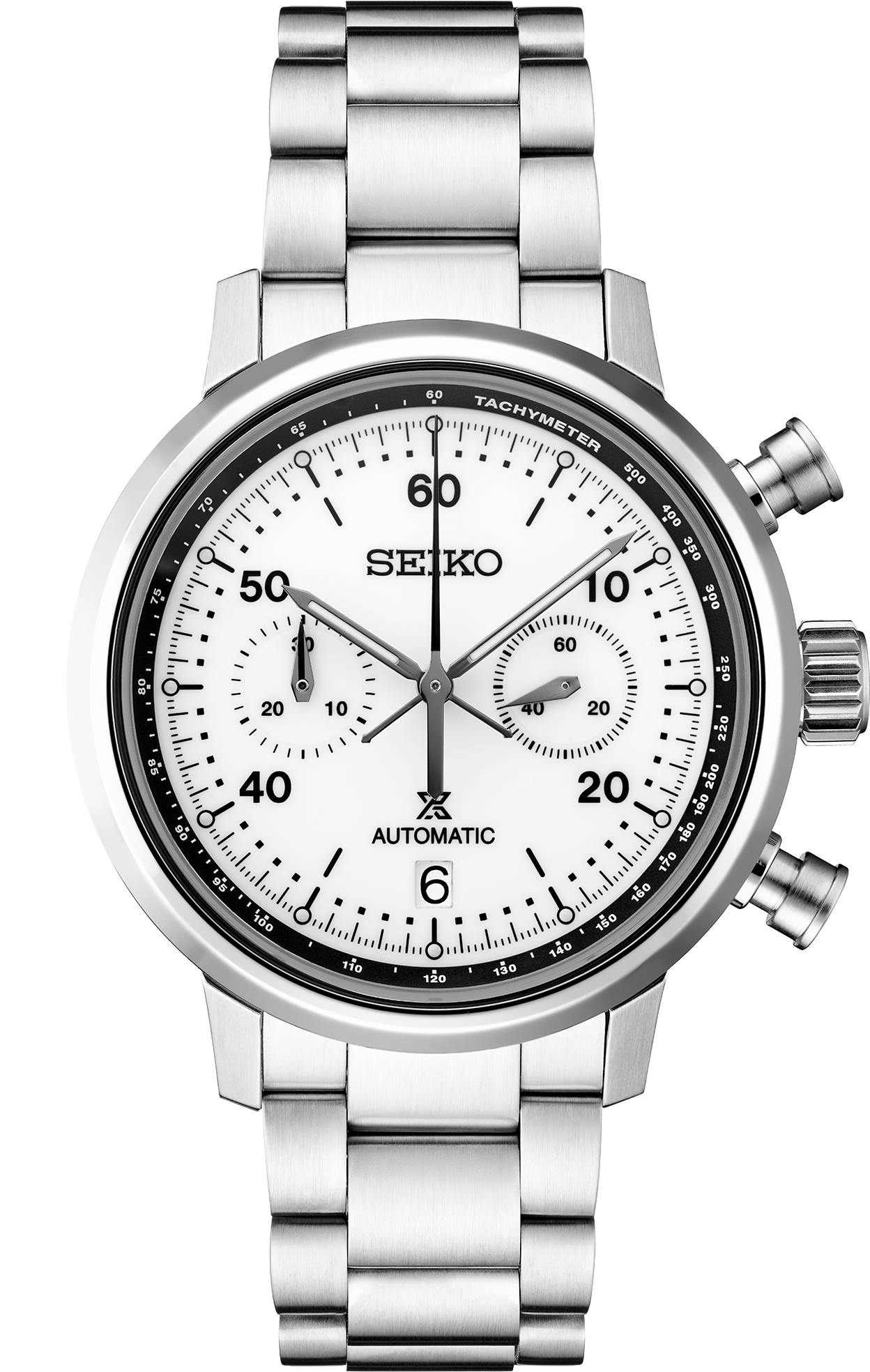 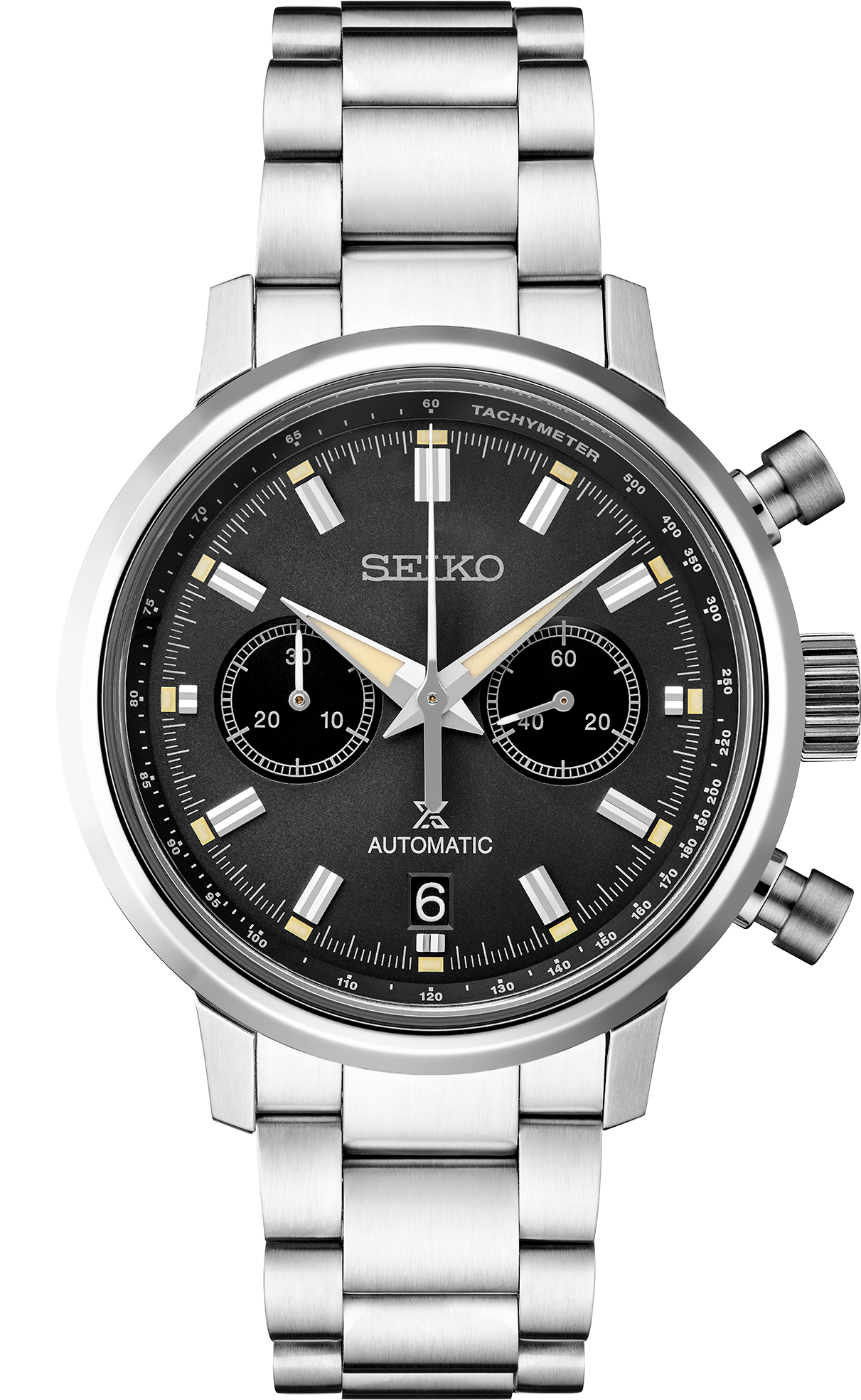 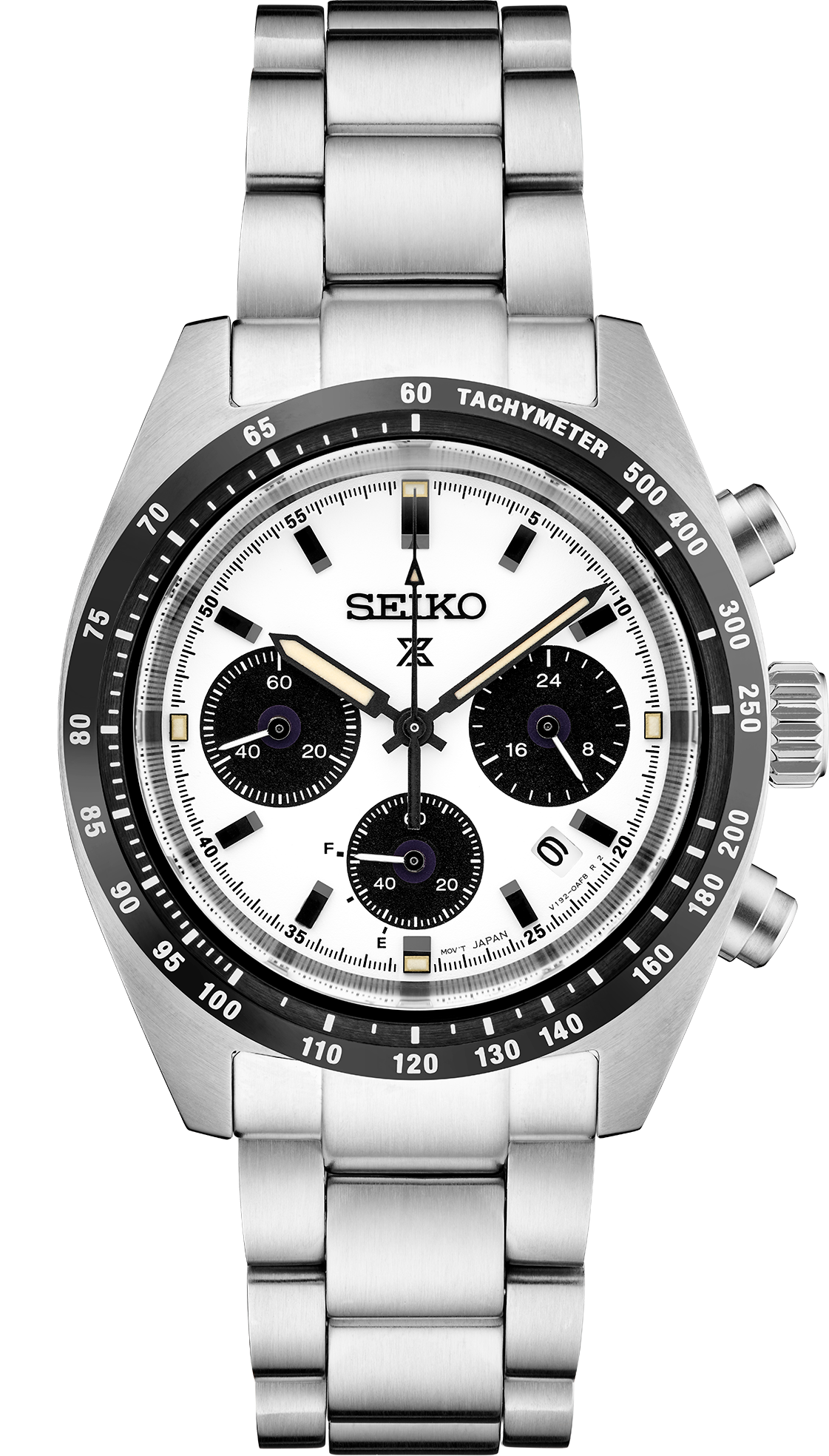 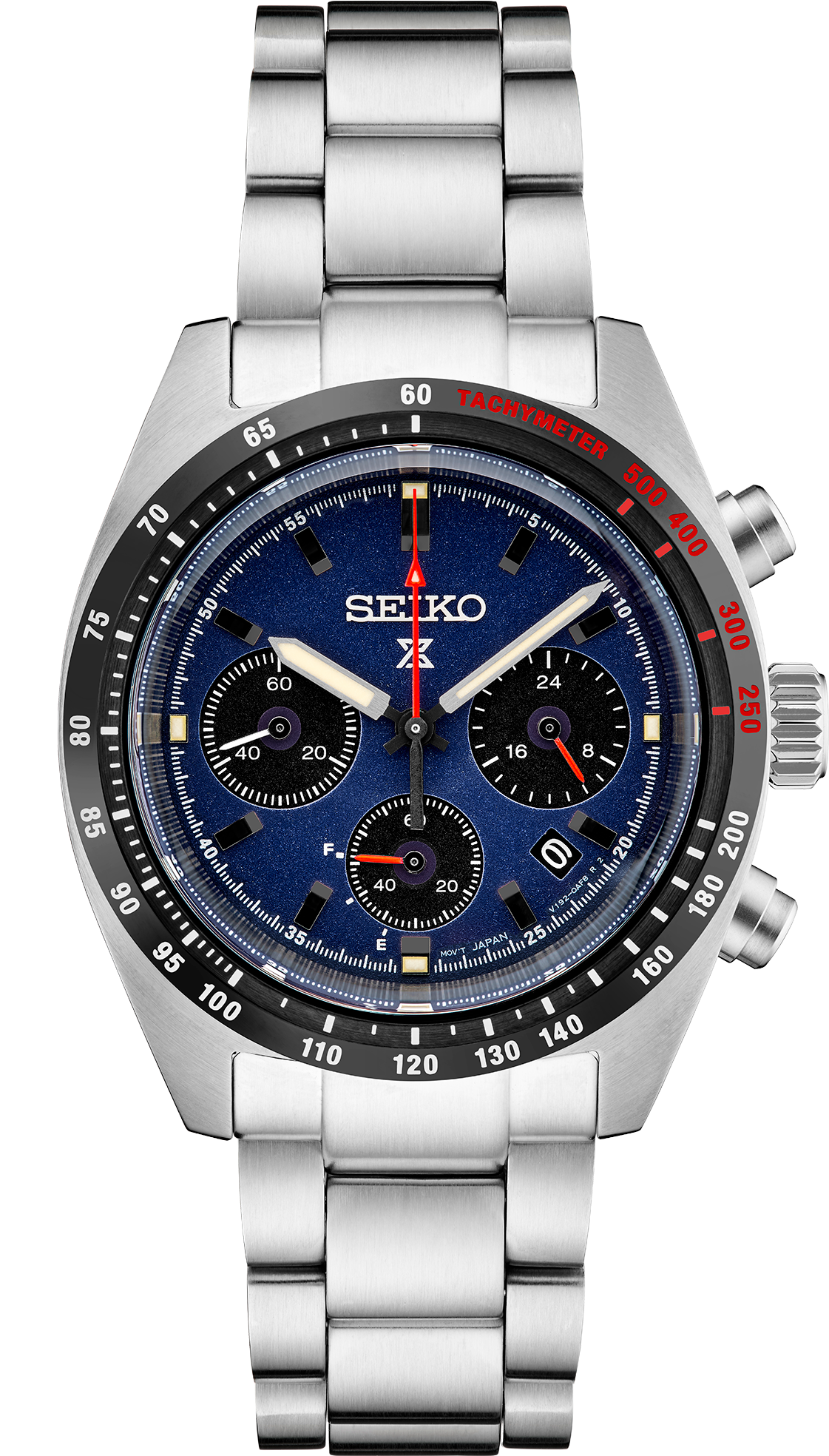 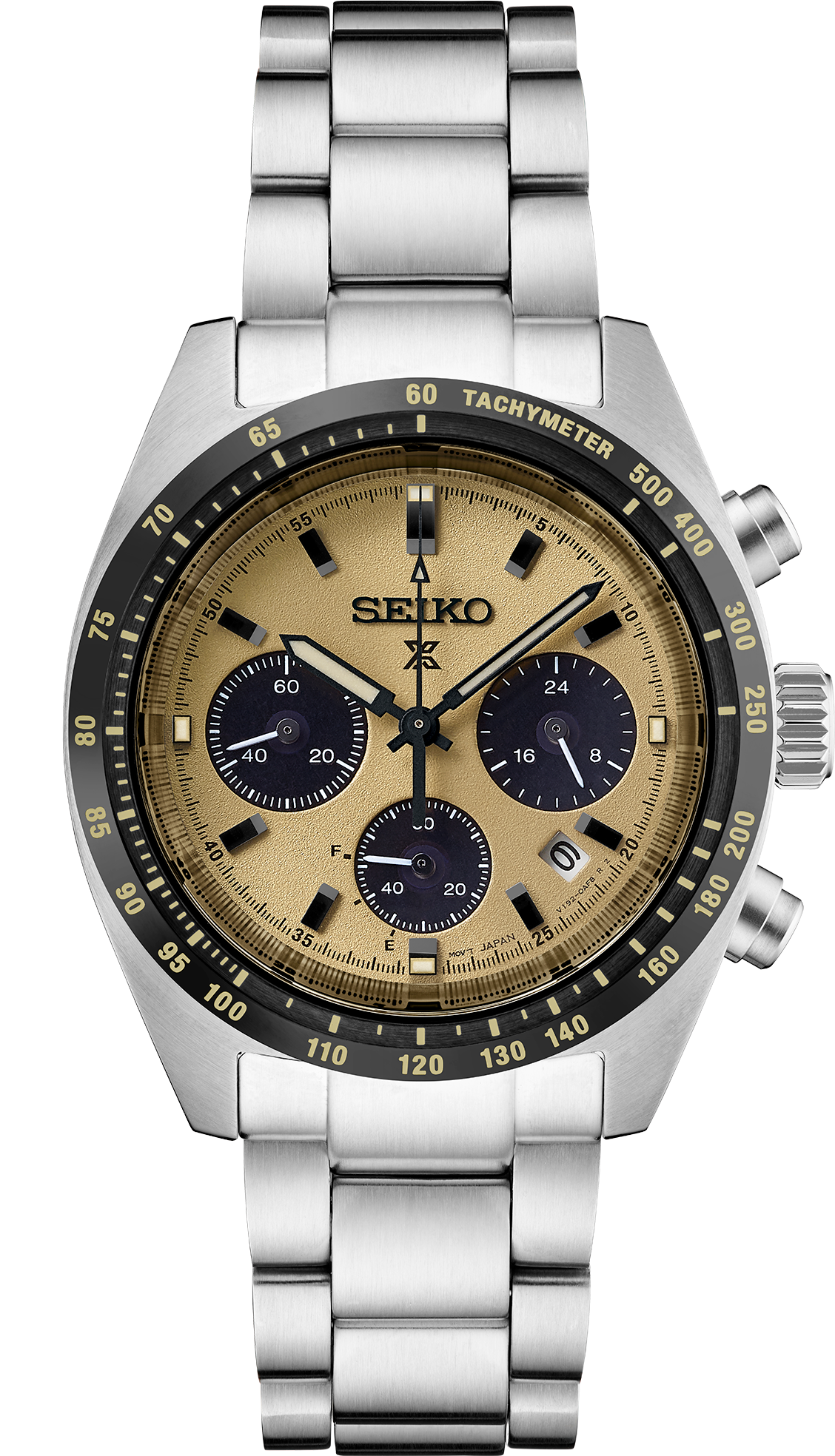 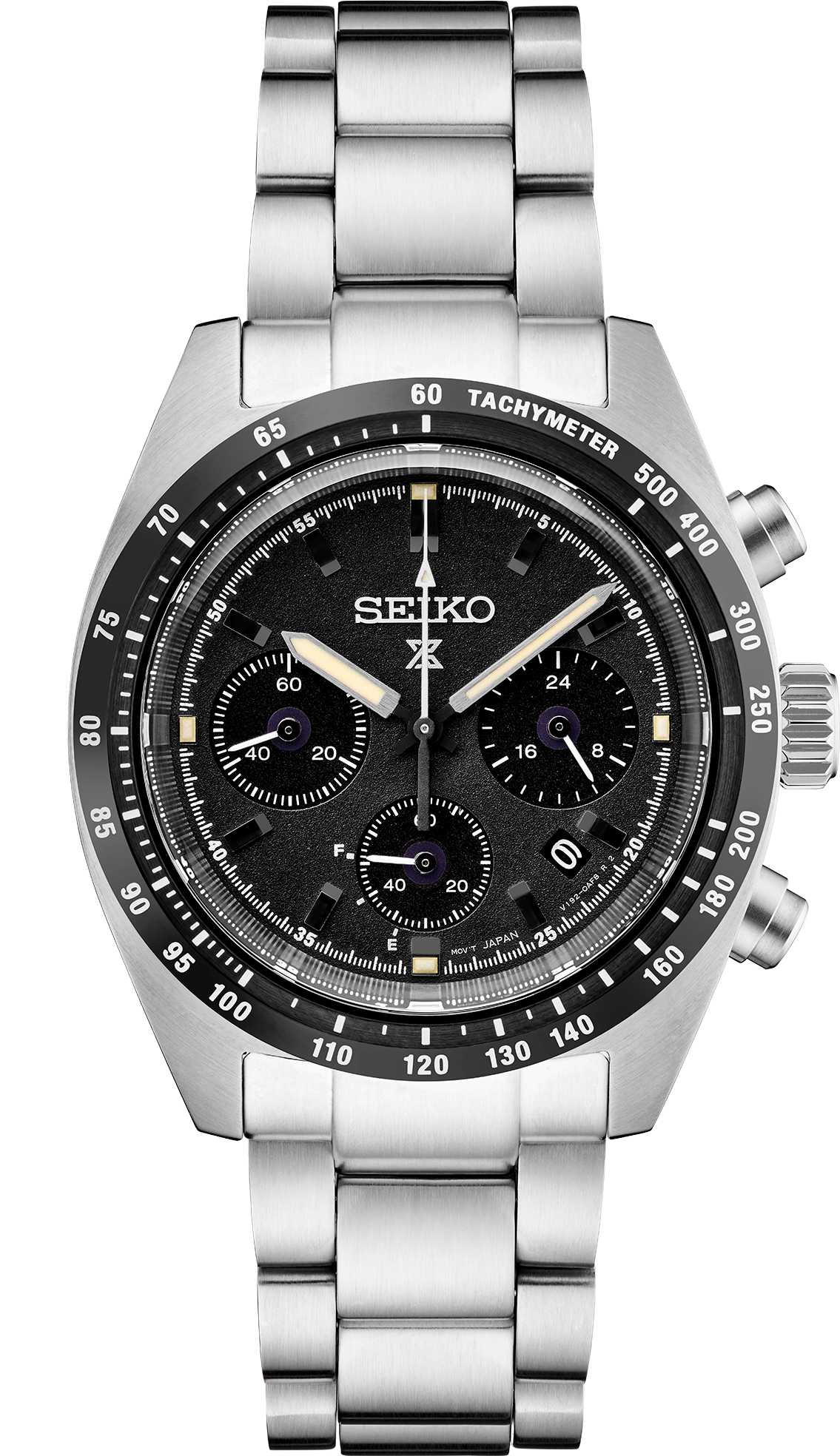